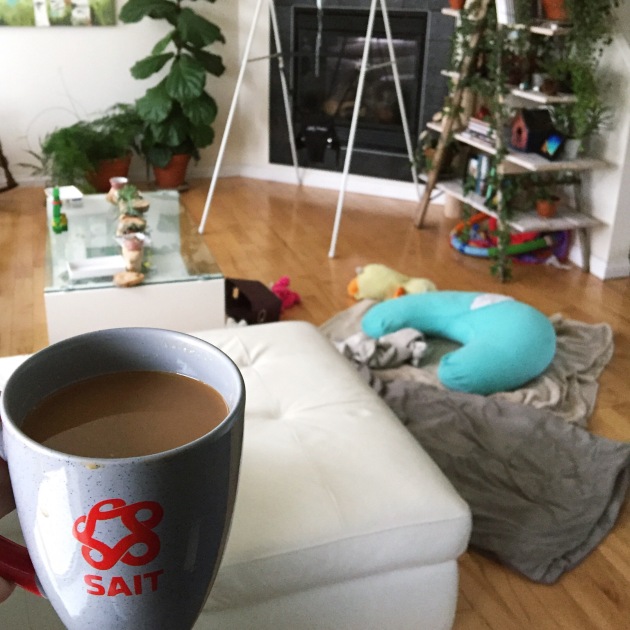 We’ve had quite the night and morning!

My non-cuddly baby has decided over the course of yesterday and today that she must be touching me at all times to be sleeping.  Last night she had to be cuddled up to me just so or she would wake up screaming.  This morning she wouldn’t settled to sleep in her crib and had to be on me at all times.  I just got her settled in the crib by putting her on her tummy – which is so unlike her because she normally hates her tummy.  Anyways, I woke up this morning an hour later than usual with my neck so sore and my head pounding (all fixed with a bit of oils!). I came downstairs to find my coffee machine had malfunctioned (AKA I didn’t put the pot under it just perfectly) so the coffee grounds were in the coffee and everywhere around it and it had spilled all over the coffee bar. My to-do lists this week haven’t been getting done so today it’s one huge long list that won’t get done yet again.

A couple weeks ago today would have totally been a write off in my mind. It would have made me irritable and impatient therefore ruining my kids days as well.  I would have moped around doing things here and there but not completing any of it and all the while grumbling and using a tone of voice that makes me cringe every time I use it.  I would have internally been screaming about the injustice of it all. A couple weeks ago today would have been the worst day ever (exaggeration much?), but I’ve been trying really hard to be intentional with my thought processes.  I’ve been acknowledging the negatives – yes the day has started out on the wrong foot, yes it’s not how I would have liked it to start.  After quickly acknowledging the crap I replace it with all the good – and there is a lot of good to be seen if only you take some time to look.

Todays list of good includes things like getting all the cuddle time in after thinking I’d never be able to cuddle my baby again.  Ezekiel is being amazing, playing quietly and entertaining himself while I have been trying to calm a fussy baby.  He’s using words like “delighted” (“I was delighted to clean up that mess I made by accident” – that’s an actual quote! Who is this kid??) and making my heart melt several times a day.  We had to cancel our plans today which sucks but it also gives me a big chunk of time to be productive and get some things done (water plants, clean the front closet, do dishes, fold laundry, make tomato sauce, clean floors …..).  Cancelled plans also means I get some time to cuddle without worrying about getting out the door, relax in my PJ’s all day, bake some muffins, put some effort into supper tonight (seriously lacking in that department lately).

I’ve found that practicing gratitude by focusing on the good instead of the bad has completely changed my day to day life.  It’s made me a much more patient mother and wife.  It’s helped me to breathe deep and embrace the moments of the day.  It’s helped me to think more clearly, dream a little more and understand that there is so much beauty in the imperfections of our days.  I’ve slowed down internally, my mind doesn’t race about all the things I want to accomplish and by slowing down internally I actually find I become more productive.  By focusing on the positives I’ve learned to stop and watch when Ezekiel says “Hey mom! Look at this!” and by stopping and watching I am acknowledging him as a person, as someone who is proud of what they’ve accomplished and I think that’s crucial to empowering the next generation.  I no longer glance for half a second and say “that’s great,” instead I put the dishes down look him in the eye and say, “Wow! You are really getting good at…..” I’ve noticed that this small change has made him less dependent on me and more independent when he’s playing.  Practicing gratitude has changed not only my day but the days of my little people as well and it’s shown me the impact of my actions on those around me.

I’m not going to lie, this is a difficult practice to implement consistently.  It’s so much easier to allow the negative to envelope me but the reward of this practice is unbelievable.  So today as you go about your day and the negative tries to invade your thoughts and actions I urge you to acknowledge them, let them go and replace them with positive thoughts.  I promise you that by practicing this you will not only change your day to day life but you will impact every person you come in contact with and little by little people’s lives will change around you.

My name's Ashley, I'm a wife, momma, and nurse. I'm on a journey to simplify my life so that I can fully enjoy every moment without the distraction of "things". Thanks for stopping by and remember to say hello!
Follow Joy of Simplicity on WordPress.com